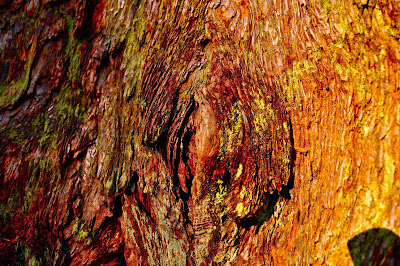 The Daily Photo theme for Oct. 1 is "Detail."  I post lots of macro photos of cacti and flowers throughout the year, so I thought I would take a little liberty with the theme by posting a photo from our neighboring state, California.

This is a detailed shot of one of the world's largest living things, a Giant Sequoia in Sequoia/King's Canyon National Park.  The late afternoon sun caught this knot and bark, whose rough texture also provided a habitat for moss and lichen.

Today is the first day of a federal government shutdown, so Sequoia and all other U.S. national parks are closed.  People cannot enter the parks, and people who are staying in the campgrounds and lodges in the parks are being told to leave.  What a shame for people who had planned their vacations, especially foreign visitors for whom this was a long and costly trip.  What a shame for our national pride and sense of identity, and as a reflection upon our political system.

This week we have photos of the Wadi Rum Desert of Jordan posted on our Viva la Voyage travel photo site.

To see how other City Daily Photo bloggers have interpreted the theme of "details," please use this link.
Posted by Julie ScottsdaleDailyPhoto.com at 2:30 AM

This is a sad day that we have treasures of nature than the incompetence of our government prevent people from seeing.

Tree bark always makes interesting photos and this one is excellent!

I hear you! I'm very upset because as you know, I'm planning a road trip later this month and some National Monuments are (or were) on the agenda. I'm not happy about that!
I haven't been to Sequoia National Park and several years. I need to go back one of these days.

LOvely photo and quite creative. I agree with you about the shutdown. Of course those in "power" didn't give a thought to what their actions would mean to so many Americans in so many ways. A national disgrace.
V

Colors on this are great.

The light on the bark is remarkable, turning it red and gold.