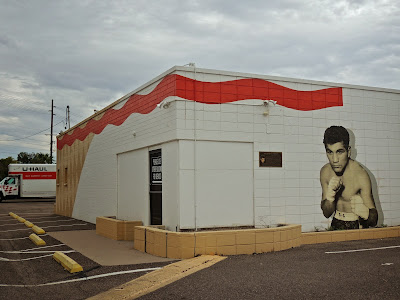 This building with the mural is part of a U-Haul dealership at 44th & Camelback.  To my surprise, the plaque on the wall, shown below says that this building used to be Tony DeMarco's Living Room, which was a piano bar hosted by Tony DeMarco, a former boxing champion, featuring his boxing memorabilia.

Here is a coincidence.  When Dave and I were in Boston this past 4th of July week, we several times walked by a bronze statue of Tony DeMarco at the entrance to the old North End district with lots of Italian restaurants, and the Old North Church of Paul Revere fame.  That is the neighborhood where Tony DeMarco grew up. 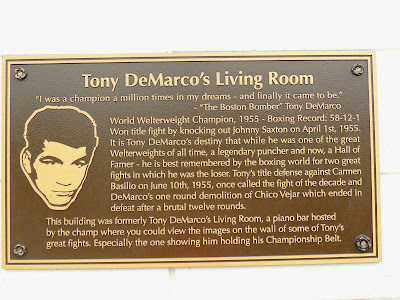 I am not a boxing fan, but I am glad to see these tributes to someone who was a champion in the 1950's.  According to Wikipedia, Tony DeMarco is now in his 80's.

I wish this building was still a piano bar instead of a U-Haul dealership.

On the subject of boxing, it is a coincidence that Partadise Valley, the small suburb between Phoenix and Scottsdale where we live, is also home to both Muhammad Ali and Mike Tyson.

I've always wondered about that mural. Now I know!

Interesting. It is a good thing that they put a little plaque on the building to explain its history.

The Boston connection is interesting.

What a great guy. I was a regular customer, friend, and fighter/trainer who managed The Village Gym down the street from his Living Room piano bar. Tony's bar was really fun and often attended by his lovely wife and daughter.
I will never forget the cheerleader who kept bugging me with her Pom Poms on Halloween.
I was so surprised to find out it was Tony in disguise. Sundays fight reels were also a treat.
I miss Tony's Living Room !
Gary Wilson