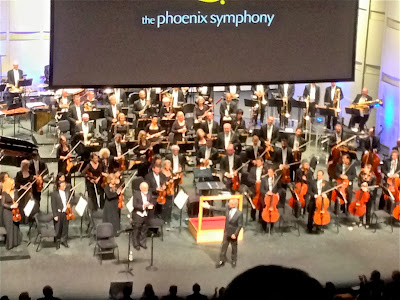 Steven Spielberg grew up in the Arcadia neighborhood, graduated from Scottsdale School District's Arcadia High School, and developed his interest in films and music there.

He has been collaborating with John Williams for more than 40 years.   The two of them generously donated their services to do a benefit concert with the Phoenix Symphony.  John Williams conducted a program of his own music from Spielberg's films, including selections from Star Wars, Indiana Jones, E.T., Close Encounters of the Third Kind, Schindler's List, and more.  Steven Spielberg gave commentary between the selections to explain the process of the movie producer and composer working together.  They showed movie scenes on a giant screen above the orchestra to accompany the music.

Of course photos were not allowed during the concert.  During one of the many curtain calls, I took this quick iPhone photo from our seats in the balcony, as other people were doing the same and it was at the end of the concert.

Spielberg and Williams not only donated their time, they paid all of their own expenses to come to Phoenix for this benefit for the Symphony.  The President and CEO of the Symphony, Jim Ward, worked with Spielberg and Williams during his previous 10 year career as an executive for Lucas Film.  This special concert, with corporate and individual sponsorships, raised more than $600,000 for the Phoenix Symphony's educational programs.

The Symphony impacts hundreds of thousands of school children through field trip concerts in Symphony Hall, through concerts in schools, and through an innovated program of musicians working with teachers in classrooms to use music as a vehicle for teaching core curriculum subjects such as science and math.

My husband Dave has been a member of the Board of Directors of the Phoenix Symphony for nearly 20 years.  We were thrilled to have the opportunity to attend a reception for donors following the concert to be able to meet Steven Spielberg and John Williams and have our photo taken with them.

It was very generous of these two gentleman to do this for the Symphony. It must have been a fabulous evening.

This was a special and remarkable evening. The audience loved it.

Spielberg and Williams are both just about the best at their professions and have been for a long time. Very generous of them to donate their time to this fundraiser.