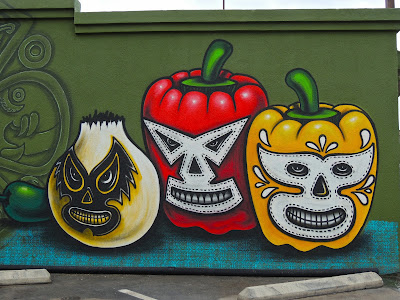 I have shown a little street art recently of the mural of a boxer, so here is some more street art. This is one of many murals in the alley behind the Barrio Cafe on 16th Street in central Phoenix.

Barrio Cafe is very small, but it has been named the best Mexican restaurant by the Arizona Republic newspaper every year since it opened in 2002.  The chef is Silvana Salcido Esparza.

If you go, I recommend starting with the guacamole, which is carved and created table side.

Fortunately, Chef Esparza is branching out and created additional opportunities for more people to enjoy her authentic and creative Mexican food.  There is now a Barrio Queen restaurant at the Scottsdale Waterfront/Southbridge near our house.  There is even a branch of Barrio Cafe now in Terminal Four of Sky Harbor Airport.

Bario Cafe is justifiably highly regarded and very well known, even though it is a very small restaurant in an undistinguished strip center in a sometimes overlooked part of town. It made its reputation on its food.

I absolutely love Barrio Café and Barrio Queen. We should go to Barrio Queen sometime for dinner. I have an all-time favorite dish there.