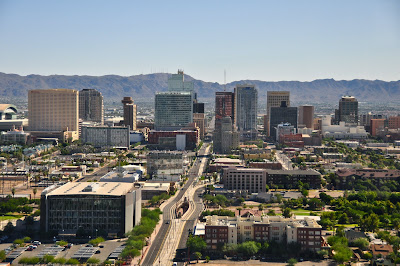 This photo looks south from our office to downtown, with South Mountain in the distance.
There are lots of recognizable buildings in this photo. in the lower left is the main Phoenix Library. Just beyond the library, where the road splits there is the deck park, on top of a sunken stretch of Interstate 10. Thank goodness this massive highway was placed below ground cutting across central Phoenix.
Going farther down Central Avenue, on the right, just before the copper colored high rise, there is a grey mid-rise building with a tall antenna on top. That is the Westward Ho, which at one time was the tallest building between Texas and Los Angeles. It used to be a hotel, and is now a senior citizens home.
The tall building on the right is Phoenix City Hall. The building with the widest facade in the center of the Photo is the headquarters of the Freeport McMoran mining company, which acquired Phelps Dodge Copper Co. several years ago. The wide tan building on the left is the new Sheraton Hotel.
This week we are showing photos of the Canadian Thanksgiving at a lodge on Cape Breton Island, Nova Scotia on our Viva la Voyage travel photo site.
Posted by Julie ScottsdaleDailyPhoto.com at 2:56 AM

particularly nice balance in this one and i love the orienting details.

You have a wonderful view from your offices! I'd love to take some night photos from the sometime.

I remember the Westward Ho when I first came to Phoenix 40-some odd years ago.Did not know what they were using it for until now. Interesting.

The downtown skyline has added width and density from the time I first moved to Phoenix in 1982 and started working in what was then one of only about a half dozen tall buildings downtown.

I really like this shot- I sure am getting the tour-of-tours!!!