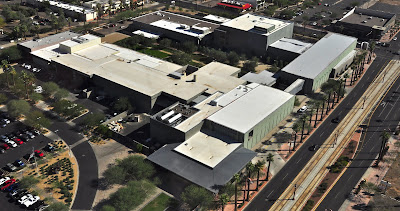 This photo looks down from our office onto the Phoenix Art Museum. From its beginning in 1959, it has now grown to a collection of 18,000 works of art, with 285,000 square feet (26,500 sq. m.) of exhibition space.
The building has been expanded several times during the last 20 years, and the Art Museum took over the space of what used to be the main Phoenix Library, which is the wing at the top of this photo.
We have enjoyed very memorable special exhibitions that have been hosted at the museum, in addition to its regular collections. David and I are members, and we are also members of several of the museum's support groups for Latin American, Asian, and European art.
As you may have gathered from my post yesterday and today, David and I are supporters of the arts in Phoenix and Scottsdale. David is the longest consecutively serving member of the Board of Directors of the Phoenix Symphony, now in his 5th 3-year term. Several years ago David and I hosted a reception at our house for the Boards of Directors of the Heard Museum, Phoenix Art Museum, Symphony, Ballet, and Opera and several of the Phoenix City Council members who support the arts. Phoenix arts institutions lack the endowment of arts organizations in older cities of the East and Midwest because the area has grown to be a major metropolitan area only in the last 50 years.
Today is Sunday, so we have photos on our Viva la Voyage travel photo site. This week we are showing photos of the Canadian Thanksgiving at a lodge on Cape Breton Island, Nova Scotia. It was my pleasure to join friends there recently, and I hope you will join us by visiting the site.
Posted by Julie ScottsdaleDailyPhoto.com at 2:56 AM

Oh, my heavens that's a lot of space...I need to where my sneakers when I go. Wow! I need to make this a place on my list to visit soon.

Wow, it looks so much bigger from this vantage point.

The Phoenix Art Museum occupies an important place in the arts and culture of Phoenix. Every major metropolitan area needs a first rate major art museum and Phoenix is fortunate that donors have assisted such a young city to develop such a major asset.

These aerial shots are great. Gives a different perspective of buildings you have been inside.

It is a big building for a relatively new museum. Starting a new museum in a relatively new city must be very hard. So often, museums get their starts because a local benefactor wants to pass on his/her collection. Without that, building up a collection from scratch is an expensive proposition.

Such a shot makes us realize how big it is.
The exhibits are getting better and better by the year. When we arrived in the valley more than 20 years ago, the exhibits were not diversified at all and a lot of art pieces were kept in boxes...
It's one of our favorite places. They have interesting photographic exhibits too.