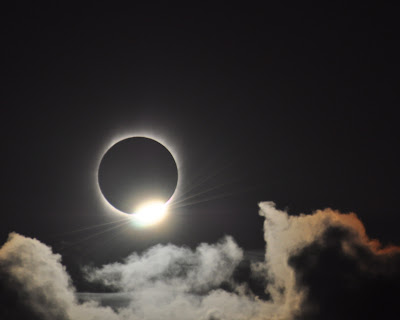 Look at the rays on the diamond ring. Gorgeous. I love this photo of the solar eclipse that occurred on July 21, 2009 in the South Pacific.

You can see the clouds that provide dramatic back drop for the diamond ring effect of the sun and moon. The clouds were quite a challenge and can easily block the entire experience.
I did not yet have my solar filter placed back on my camera lens but did so shortly after this photo.
When photographing the solar eclipse, I used bracketing so I could capture the photos in various exposures with the click of the cable shutter release device. I was taking continuous shots.
I used manual focus to set my focus and did not rely on infinity. You do not want to use digital zoom as that does not give more details.
I took photos in raw and jpeg so I can try to work with them later and create a composite using software like Photomatrix or HDR. This is all new to me so I am going to continue to expand my knowledge and experience with cameras and software.
I thought I would have taken the entire series of photos at F-8 or F-11 but I had to adjust based on the fast moving ship and rockiness of the waves.
One of the most important items I invested in just before the trip was a Manfrotto tripod with a ball head. The tripod helped immensely to keep my camera still. It was easy to use, very functional, but it is also very pricey. I hope to have it for life.
Another tip is to make sure you remove the UV lens filter from your camera before taking photos of a solar eclipse. Also, you generally do not want to use a sun shade on your camera as that can cause reflection.
You also need to be prepared to change your ISO as conditions change. It would be good to shoot an eclipse at ISO 200, but I mostly used ISO 400 because of the ship's movement. Also, the temperature cools during an eclipse so you have to monitor your focus and other settings.
The key is also to shoot photos at many different shutters speeds, going from 4000 down to one second then cycle back to 2000 or 2500 and go again. In comparison, if you were shooting the Moon, you might be using F8 and 125 for the shutter speed.
I hope you are enjoying this solar eclipse series. It was a very challenging experience to photograph but so rewarding with photos like the one today. I did keep stopping to just look in admiration at the eclipse, the Moon's shadow across the ocean, the shadows around us, which were very strange indeed, and to listen to all of the comments from the people around me wearing their strange 3-D looking glasses to view the eclipse.
It was a hoot to see and hear people during the eclipse. The eclipse from first contact to fourth contact lasted about two hours.
Posted by Julie ScottsdaleDailyPhoto.com at 2:56 AM

Wow, wow and wow again. What a stunning picture!

You really can see the diamond ring! This photo is magical and I must say, you learned quite a bit about photography on this trip. I'm not sure I could have remembered all of that.

Certainly was a once in a lifetime experience.

Another gorgeous one! The clouds add a wonderful drama touch.

Stunning Julie! Thanks again. I am really enjoying this!

No doubt about it, this is one of the better photos of that event that I have seen.

Be part of history. Become a Follower or leave a comment. Tell you friends. Link up. Abraham Lincoln

This is SERIOUSLY good! Fantastic pictures!

This is absolutely amazing. You are really getting some nice shots.

Diamond ring is the perfect name! Totally brilliant -- Yes, I am really enjoying this series, too. (Your other series have been grand, as well!)

Definitely my favorite so far. I've wondered how you would have to adjust your settings while the eclipse was changing. It seems you kept pretty busy.

Oh, that is my very favorite one! How neat is that! I can't tell you how impressed I am with your photography skills! Thank you so much for sharing all of this with us. It has been such a treat!

These pictures are just amazing. I think I like this one the best of the series.

its a LOVELY diamond ring!!! :D

and a wonderful series of the eclipse, thank you! :D