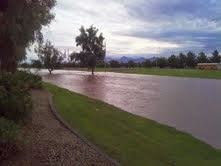 Here is one more photo that shows how Scottsdale handles the occasional downpours that come in the desert in the July-September "monsoon" season.  The rain last Monday was a record rainfall for one day during the more than 100 years that they have been keeping records.

Indian Bend wash is a greenbelt designed to hold flood water when there is heavy rain, and to be a recreation area at all other times.

It gets heavy use, with bike trails, parks, golf courses, lakes, etc.  And when there is heavy rain, it holds extra water like this for a day or two.

The U.S. Army Corps of Engineers originally wanted to build a big concrete ditch like they have in Los Angeles.  What a disaster that would have been.   Scottsdale rejected the plan and built the greenbelt instead.  It was an act of civic planning brilliance.
Posted by Julie ScottsdaleDailyPhoto.com at 6:59 AM

I agree. It serves it's purpose beautifully.

Gold star for Scottsdale then! Your photo shows it well.

That really was quite a sight to see!