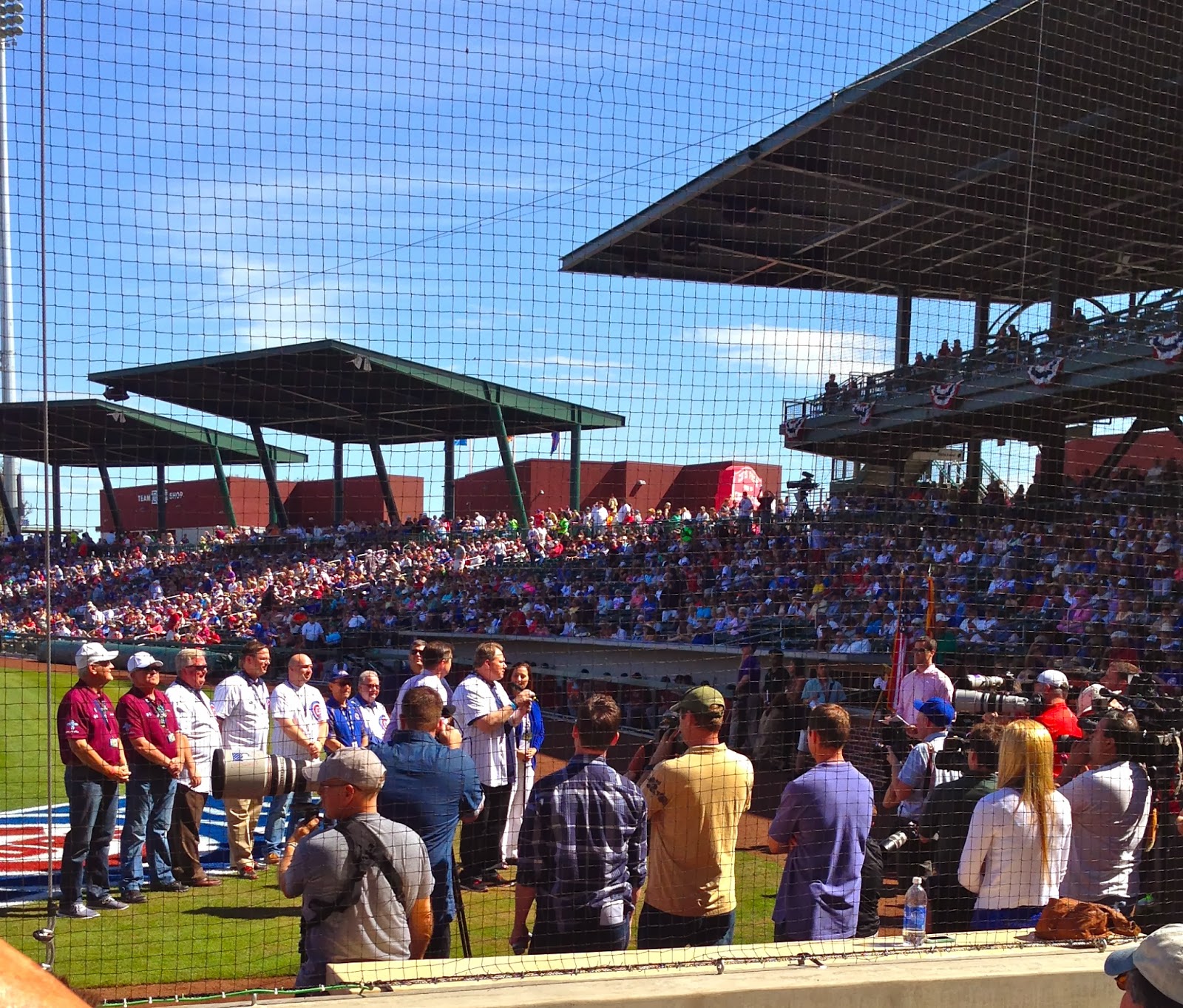 Play ball!  In a brand new stadium!  Yesterday was the opening day and first game ever in the new stadium for the Chicago Cubs Spring Training location in Mesa, directly southeast of Scottsdale.

This photo shows that the new stadium offers a lot of shade, which is helpful, as it was a glorious 80 degrees (26.7 C) yesterday.

This photo shows Mesa Mayor Scott Smith addressing the crowd in the festivities before the game.  Mayor Smith led the project to build a new stadium and to achieve a long term lease with the Cubs to keep them in Mesa.

Mayor Smith is a dynamic leader who has spearheaded many projects for Mesa.  He has also served as Chair of the National Conference of Mayors and has recently announced that he is running for Governor of Arizona.  (There is a rather crowded field of Republican candidates for Governor).

The Cubs and other spring training games are a major economic contributor to the Valley of the Sun.  We have the San Francisco Giants stadium in downtown Scottsdale and the Arizona Diamondbacks and Colorado Rockies who train at Salt River Fields right next to Scottsdale on the Salt River Pima Maricopa tribal lands.  The new stadium is in the west end of Mesa, very close to Scottsdale and Tempe.

I have had season tickets to the Chicago Cubs spring training games for decades, as I grew up in Mesa.  My mother attended the opening game yesterday, and she took this iPhone photo from our new seats.  I can't go to any of the games during the week because I work, but I plan to go to a game this weekend.  I am looking forward to checking out our new seats.

This week we are showing photos from our recent trip to the Galapagos Islands on our Viva la Voyage travel photo site.

Posted by Julie ScottsdaleDailyPhoto.com at 4:39 AM

Spring Training is a delightful time in the Valley. I am looking forward to seeing the new stadium.

Any idea what they are going to do with the old stadium?

Nice, Julie. The Boston Red Sox (my team!) has a one year old stadium in Fort Myers, about half an hour north of Naples, and every spring training game is a sellout. I don't have season tickets, but fortunately I will go to one game with a college alumni group. Play ball!