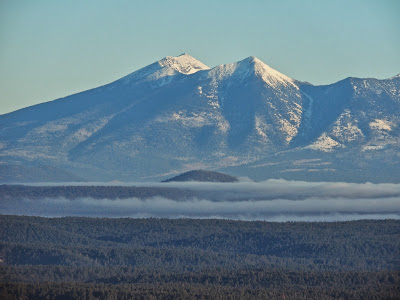 The San Francisco Peaks just north of Flagstaff dominated our view during the first part of our flight from Sedona to Grand Canyon West airport.

In this photo you can see part of the morning layer of fog that extended all the way across the Kaibab Plateau from Flagstaff to the Grand Canyon.  Our pilot said that the Grand Canyon is filled with fog only 2 or 3 times per year, so this was a very rare sight.

This photo demonstrates the clear Arizona skies, as we were probably 30-40 miles (50-56 km) away from the San Francisco Peaks, extinct volcanos that reach a height of 12,622 ft (3,851 m).  The mountain is sacred to Native Americans, and is also the site of the Arizona Snowbowl ski area.

This week we have photos of the people of Ethiopia posted on our Viva la Voyage travel photo site.
Posted by Julie ScottsdaleDailyPhoto.com at 2:30 AM

This entry is full of interesting information.