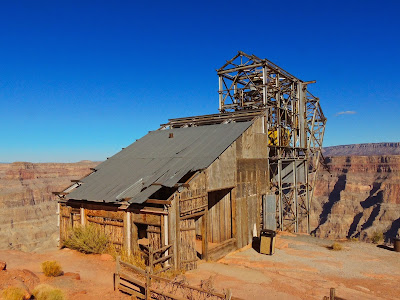 One of the overlooks at Grand Canyon West had a trail that led to a spot called Guano Point.

The guano mine was in operation for only about a year or two at the end of the 1950's, as it turned out that the engineer's prediction of the amount of guano in the cave was vastly inflated, as most of what was predicted to be guano, used for nitrogen fertilizer, was worthless limestone.

The mine on the opposite side of the Canyon is now within the National Park boundaries.   The Park Service wanted to remove the mine remnants, but people objected, as they now consider the property of  historic interest.  My husband and I enjoyed walking through this old building and taking photos of the old machinery, which I might post in the future.

This week we have photos of the spirituality of the people of Grenada, Nicaragua posted on our Viva la Voyage travel photo site.
Posted by Julie ScottsdaleDailyPhoto.com at 2:30 AM

An interesting bit of history.

Enjoy hearing the history of Arizona.