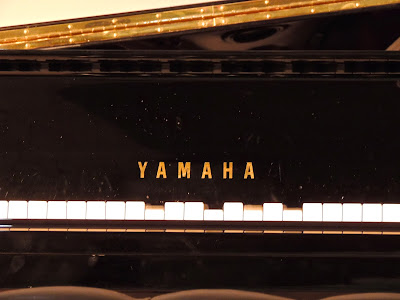 When we took our backstage tour at the Musical Instrument Museum Theater, the lone piano on stage was playing itself, as these depressed keys show.

The concert grand pianos at Phoenix Symphony Hall are Steinways.  The MIM Theater has this Yamaha grand piano.  I am sure musicians have their preferences.

Vladimir Horowitz used to travel with his own Steinway concert grand rather than use whatever piano was in the venues in which he played.  The Steinway dealer in Scottsdale years ago had the Horowitz concert grand piano on display while the piano was on tour, and people could make reservations to take turns playing it, which my husband and his sons did.

This week we are showing photos of the Hassan II Mosque in Casablanca, Morocco on our Viva la Voyage travel photo site.
Posted by Julie ScottsdaleDailyPhoto.com at 2:30 AM

Who would ever think that you could take an "action shot" of a piano sitting by itself.

Many, many years ago on a trip to California to visit Disneyland, I somehow ended up in a piano showroom where a series of Yamaha pianos were wired electronically to play recorded music. They told me that if I had a great pianist sit at the piano and play something, the piano would record it and then I could play it back just as it was played before for as long as I want. I didn't know any famous pianists so I didn't buy one. :-)