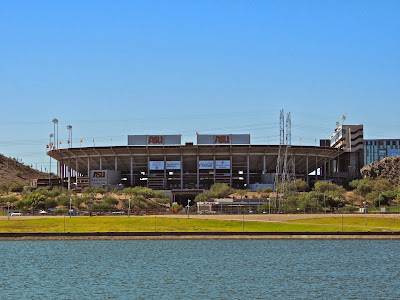 This is a view of Arizona State University's Sun Devil Stadium across Tempe Town Lake.  When I went to ASU, the Sun Devil football games were the main sporting even in town, as that was before we had the Arizona Cardinals or the Diamondbacks.

People used to park their cars for football games in the gravel riverbed, which is now beneath Tempe Town Lake.  On rare occasions, about once per year, the Salt River Project would release water from the upstream dams and water would flow down the river.  If a football game was occurring after one of the water releases, they would make an announcement during the football games warning people to move their cars, otherwise their cars may be floating down the river by the end of the game.

This week we are showing photos of Valparaiso, Chile, which has the most extensive and talented street art of any place we have visited, on our Viva la Voyage travel photo site.
Posted by Julie ScottsdaleDailyPhoto.com at 2:30 AM

That stadium has gone through a lot of changes over the years.