Photo: What a Sports Coat! 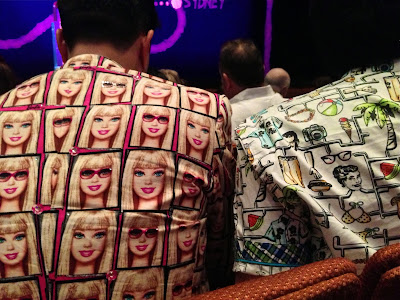 Take a look at this sports jacket on the man sitting in front of us at the Valley Broadway Series.  I don't know how many places there are that one would wear this sports jacket. Certainly not to the office for work.
My mother, Sharon, and we have season tickets for the Valley Broadway Series, which features the touring Broadway shows.  On Sunday evening, while waiting for the show Priscilla to start, Dave took this quick iPhone photo.  It was one of those instances of taking a photo that otherwise would not have been taken if not for this Daily Photo site.

Sadly, I had to make a quick business trip to Washington, D.C. on Sunday and Monday, so I missed the show, but Dave and Sharon decided to coordinate posts today to show the fashions worn by two of the members of the audience.  Check out Sharon's Phoenix Daily Photo post at this link.   She got a quick photo of a woman in the lobby before the show.

The first song and dance number of the show, Priscilla, right after intermission featured about a dozen members of the audience who the show selected at intermission.  They gave them quick instruction and guidance during the number and all of them were wonderful sports and performed well.   The man in this photo and the woman in Sharon's photo were both selected to join in the performance.

This week we have photos of an old cemetery and medieval ruin on the Hill of Slane, Ireland, posted on our Viva la Voyage travel photo site.
Posted by Julie ScottsdaleDailyPhoto.com at 2:31 AM

Very different it is.

this was so much fun. I totally forgot to mention that these people got to help with the second act opening number.

I don't know where one would find a sports coat like that. I don't think I will look for one, though.

This was truly a fun evening! Music and costumes were fantastic. The outfits of people in the audience were really fun!