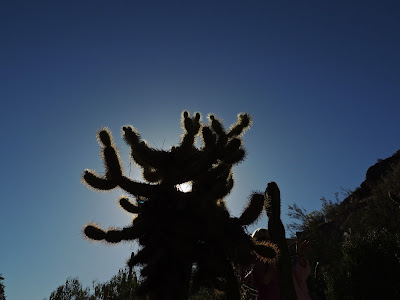 While on the cactus walk and the Phoenecian Resort, we had an angle to look up at the afternoon sun being blocked by a cholla cactus.

In Arizona, and hopefully elsewhere, we pronounce words that are Spanish in origin, such as cholla, using the "Y" sound for the double "L."  So "cholla" is pronounced "choya."

That is the correct pronunciation that would be used in most of Latin America.  In Argentina, it would be pronounced "chozha."

The most common example of this pronunciation is the Spanish word for chicken, which is pollo.

Today is Sunday, so we have new photos posted on our Viva la Voyage travel photo site.  This week we are showing photos of Waterford, Ireland, the home of Waterford Crystal.
Posted by Julie ScottsdaleDailyPhoto.com at 2:30 AM

It is better that the jumping cholla is up on the ridge and not near the trail.

That must be a hefty cactus, it's doing a great job of blocking the sun.

I have been stuck by a Jumping Cactus while reaching for a golf ball. I did not think I was getting that close, thus the nickname "jumping cactus".