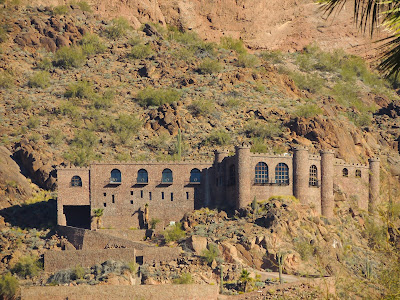 You may have noticed in yesterday's photo that there is a house that looks like a castle high up on Camelback.  Here is a closer view.

The next buyer bought it from a bank in 1989 for $985,000, but filed bankruptcy in 2004.  An insurance company bought it for $2.6 million in 2005, but the insurance company was later liquidated and the house went into foreclosure.  I local man bought it last year for $1.45 million, but estimates that it needs $3 - $5 million in renovations.  It has 7.900 square feet of living space with unusual castle-themed features.

This week we have photos of Galway, Ireland and the Cliffs of Moher posted  on our Viva la Voyage travel photo site.
Posted by Julie ScottsdaleDailyPhoto.com at 2:30 AM

If does not sound like this has been a good investment for people.

I'd say that financial back luck seems to go hand in hand with this place.