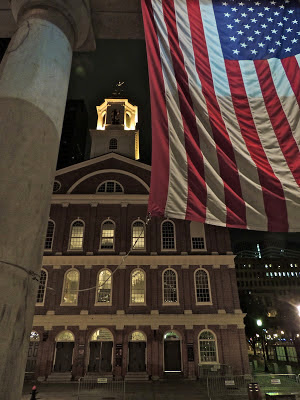 I know that this is not Scottsdale, but I could not resist posting this photo for the 4th of July.  This is a photo of Faneuil Hall in Boston, taken from the portico of Quincy Market.

Independence Day seems more appropriately part of the history and culture of the 13 original colonies where people risked everything to support independence from Great Britain.  What is now Scottsdale at that time belonged to Native Americans, and Arizona was ruled by Spain, later to become part of Mexico.  Arizona did not become part of the U.S. until the 1840's, 100 years after Faneuil Hall was built in Boston.

In fact, the first American Revolution was not the colonists declaring independence from the British in 1776.  Nearly 100 years earlier, the Pueblo Revolt of 1680 drove the Spanish out of what is now New Mexico and reestablished Native American rule, but the Spanish returned about 12 years later.

This week we have photos of a night at the opera in Paris posted on our Viva la Voyage travel photo site.
Posted by Julie ScottsdaleDailyPhoto.com at 2:30 AM

I was just thinking about how this looked so much like Quincy Market and then learned that it is! There are so many historical structures to see in Boston -- glad you got to visit. Many public buildings from the 1800s were built with "Quincy" granite.