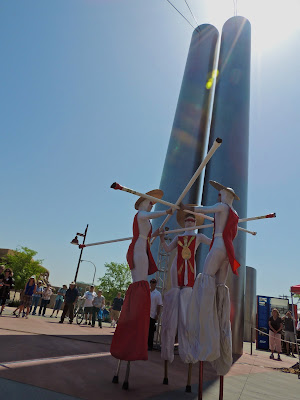 The Flam Chen performance artists used their stilts and poles that seemed at times to be like jousting poles to form various formations as part of the solar ceremony in the plaza on the Paolo Soleri-designed pedestrian suspension bridge over the canal at the Scottsdale Waterfront.

Since this was a solar ceremony, I tried to get a low camera angle to include the sun, the bridge and the artists in the photo, which was tough to do.  I wish I had brought a wider angle lens.

This week we have photos of Jerusalem posted on our Viva la Voyage travel photo site. We are featuring photos that show both the Muslim and Jewish holy sites, including the Dome of the Rock and the Wailing Wall.
Posted by Julie ScottsdaleDailyPhoto.com at 2:30 AM

This must have been part of the celebration I wrote about last Wednesday when I visited the sculptures on the bridge.

This was a unique event.

I love how you framed it.