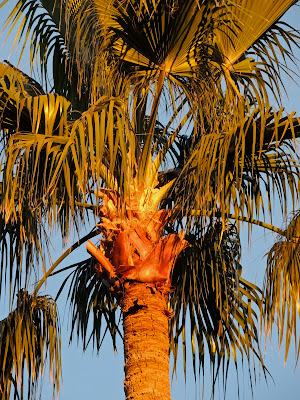 This is a zoomed in photo of the top of the tall palm tree that I showed yesterday.  You will notice that some of the older, lower palm fronds have been cut off.  It the palm trees are not trimmed every year or so, the dead branches will hang on in an brown clump and add even more weight to the top of the tree.

It is hazardous work for someone to climb up the tree and saw off the dead branches.  If the trees are not kept trimmed and there are bunches of dead branches and leaves, the clump of dead leaves can be a haven for scorpions to live.

Fortunately, we do not have scorpions where we live.  We have never even seen one in our house or yard.  When my brother moved into a house in an old citrus orchard with a few tall palm trees that had been neglected for years, he hired someone to trim the palm trees.  When the man climbed up and started to cut the branches, he became covered with scorpions and he quit the job.  I don't blame him.

There have even been a few instances of tree trimmers who have suffocated when they were tied to the trees and thick branches came down and smothered them.  It is important to keep the trees trimmed regularly so they do not get overgrown.

We are showing some more photos of Africa this week on our  Viva la Voyage travel photo site.
Posted by Julie ScottsdaleDailyPhoto.com at 2:30 AM

I hope someone figures out a safer way for palm trees to be trimmed.

Good advice. The guy across the street from has his trimmed every 6 months. I'm glad. Maybe that will keep scorpions out of my neighborhood.

Wow! I have seen trees that need to be trimmed and now I know what may be hiding there.