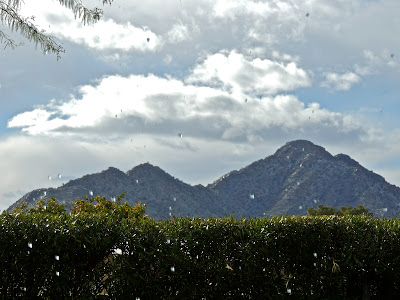 Here's a photo you don't see very often.  Snow falling with Camelback Mountain in the background.  In fact,  in 10 years of living with a view of Camelback, I have never seen snow.

I was in such a state of disbelief at the sight of snow in Scottsdale that I asked someone from my office who was on the phone with me how to tell the difference between snow and hail, because we never get snow and I wasn't sure which it was.

This week we are showing photos of Nicaragua on our Viva la Voyage travel photo site, featuring the doorways of the Spanish Colonial old city of Grenada..
Posted by Julie ScottsdaleDailyPhoto.com at 2:30 AM

Your photo today shows two things one would never associate with one another -- snowfall and Camelback Mountain.

Really neat shot with snowflakes in it.