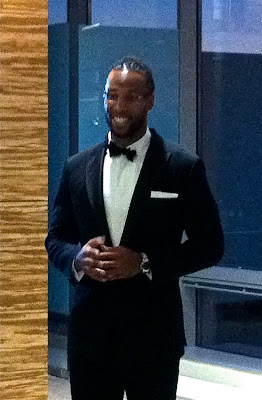 Yesterday was opening night for the 2012-13 season of the Phoenix Symphony.   Larry Fitzgerald, superstar wide receiver for the Arizona Cardinals, conducted the national anthem at the beginning of the concert.  By the time his career is completed, he may likely be recognized as the best receiver in the history of professional football.

This is a photo of Larry Fitzgerald from the reception before the concert.  I apologize for the poor quality of the photo, but it is a cell phone picture.  My husband, Dave, is the longest serving member of the Board of Directors of the Phoenix Symphony, and he snapped this little photo during the reception for Symphony donors.

Larry Fitzgerald contributes much to the Phoenix area.  He appears at many community events.  He is a class person in every respect.  He is loved by Arizonans and certainly respected by all football fans of every team.

He approached his conducting role with great seriousness.  He studied video of other conductors.  The eyes and attention of orchestra and audience were riveted upon him.

This week we are showing photos of the amazing ancient Khmer temples of Siem Reap, Cambodia posted on our Viva la Voyage travel photo site.
Posted by Julie ScottsdaleDailyPhoto.com at 5:16 AM

Thank you for posting this. The Phoenix Symphony and Larry Fitzgerald both deserve our respect and admiration.

The City Daily Photo Blog Theme Day for October is nearly upon us. Have you, as yet, given some thought to your interpretation of our theme, ‘Silhouette’? There are a number of meanings to this word, and there is no need to feel restricted to the meaning in the English language. If you are a member of Face Book, you are welcome to post your contribution to the CDPB group page at http://www.facebook.com/groups/2628431329/. If you are not a member of Face Book, you may care to post at http://cdpbthemeday.blogspot.com.au/2012/09/silhouette-cdpb-for-october.html.
As you post your October Theme contribution, please vote for your choice of the five suggested themes for November (My Street, Fresh Fruit and Vegetables, The Water’s Edge, Ageing (dis)gracefully, or The Thrill of the Dance). You may vote at either location, but please only vote once! The results will be conflated at the close of voting on Monday 8th November.

It is good seeing a professional athlete doing something positive. I know that many do, but too often what we read about is when a pro athlete goes off the tracks.

I absolutely LOVE Larry Fitzgerald!!! As a football fan, and also a city symphony fan, Larry is fantastic, and Dave is right up there with him for being a long-time supporter/mover-n-shaker of Phoenix' symphony orchestra!