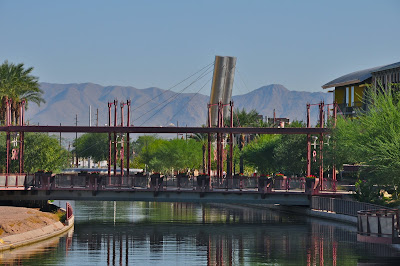 This is the scene looking east from Goldwater Boulevard near the fish wall that I have showed during the last few days. This photo shows a pedestrian bridge that connects the Scottsdale Waterfront project on the left with the Southbridge project on the right.
Inn the background are the two towers of the Paolo Soleri suspension bridge, which is also a pedestrian bridge across the canal.
It is only during the past few years that Scottsdale has decided to take advantage of the canals that cross our city, bringing water from as far as the Colorado River, 200 miles (320 km) away. San Antonio learned how to use canals as an architectural feature 80 years ago. Of course, 80 years ago Scottsdale was desert.
This week we are showing photos of a mussel ranch in Nova Scotia, Canada on our Viva la Voyage travel photo site.
Posted by Julie ScottsdaleDailyPhoto.com at 2:55 AM

Great photo! I've walked across that first bridge many times.

It makes sense to use the canals to enhance the area and create development opportunities.

I have yet to see that bridge. I was in Scottsdale but wasn't sure where to look.

Not only does San Antonio use its canals for commerce and tourism, but when they run out, they dig some more! Very entrepreneurial, those Texans.