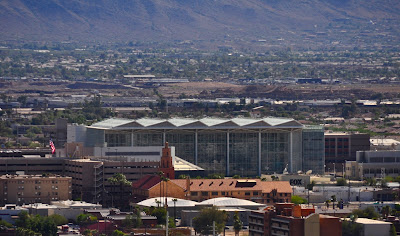 This is a view from our office to the Sandra Day O'Connor Federal Courthouse downtown. It is only few years old. There is a glass atrium that occupies the north half of the interior, which is the side of the building shown in this photo.
Sandra Day O'Connor is an Arizona native, growing up on a ranch and practicing law, serving as a state legislator, Superior Court Judge and Court of Appeals Judge in Phoenix. In additon to the new federal Courthouse, the law school at Arizona State University is also named for her.
Although she has retired from the U.S. Supreme Court, Justice O'Connor remains very active in Arizona. The house where she used to live has been moved to the campus of Arizona State University and she founded the O'Connor House project, which gathers civic leaders in her old house to brainstorm on solutions to community and government problems.
This week we are showing photos of Canadian Thanksgiving on Cape Breton Island, Nova Scotia on our Viva la Voyage travel photo site.
Posted by Julie ScottsdaleDailyPhoto.com at 2:56 AM

I'm kind of wishing her group would solve the bipartison problem we have in our government right now.

Justice O'Connor is a noble public servant even though she has retired from the Supreme Court.

More glass? Ah, to see a sunrise or sunset reflection in those windows!

I like very much your insights on these lasts posts! I heard about the relocation but did not see it once accomplished...

She played a pivotal role on the Supreme Court for quite a while. Odd that her house was moved onto the college campus. Is that in your jurisdiction or Sharon's? We want a picture.