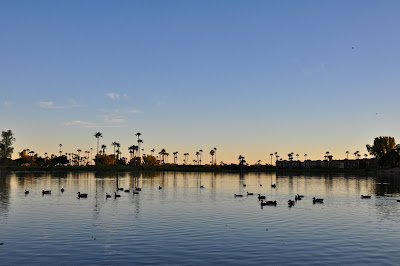 This photo shows a view down McCormick Ranch Lake. This is a large lake. To me, it looks more like Florida, not Arizona.
Former Arizona Governor Bruce Babbitt, who later ran for President and was Secretary of the Interior under President Clinton, caused Arizona to enact pioneering laws in the early to 1980's prohibit developers from using groundwater for decorative lakes and ponds.
McCormick Ranch was a 4,200 acre horse ranch that was developed by Kaiser-Aetna into a master-planned community in the 1970's, with lots of hiking and biking trails lacing through the beautifully landscaped neighborhoods. And, yes, they have lots of lakes to make the 25,000 residents feel like they are not in the desert.
This week we are showing photos of the fall colors in Cape Breton Island, Nova Scotia, Canada, on our Viva la Voyage travel photo site.
Posted by Julie ScottsdaleDailyPhoto.com at 2:56 AM

what is the status of the mccormick ranch development today?

Your photo makes it look lots bigger than it looks in person.

beautiful shot, I always admire water reflections. I don't see too much of that here in San Tan Valley, unless it's a puddle after a rainstorm.