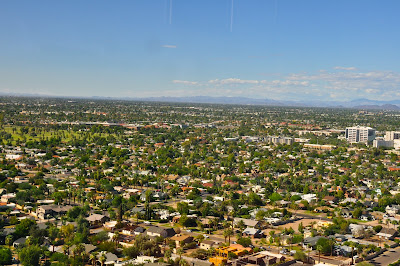 My title for this post refers to a recent newspaper article that reported that within Maricopa County, which includes Scottsdale, Phoenix and the surrounding area, with a population of about 4 million, there are now 230,000 empty houses and apartments.
That is about the same number of housing units that there are in the entire city of Tucson, Arizona's second largest city. In other words, we have the equivalent of an empty Tucson within the Phoenix metro area. The likely explanation for this is that Arizona has made things so unpleasant for immigrants that many have left, often with the rest of their families also leaving, even if other family members are citizens.
When the population drops, the sales tax revenues for local governments drop. And the empty houses hurt neighborhoods and property values.
This is part of the view that I look at from my desk in my office in Central Phoenix. This view is to the north west. For those of you who follow our good friend Sharon's Phoenix Daily Photo site, Sharon's house is in the center right of this photo, too far to see it individually. She lives in a charming central Phoenix neighborhood, a little to the left of the white medical office building on the right of the photo. The Encanto Park golf course is visible on the left.
This week we are showing photos of the Villa Balbianello at Lake Como, Italy on our Viva la Voyage travel photo site.
Posted by Julie ScottsdaleDailyPhoto.com at 2:55 AM

The problem is the same here, but I'm astounded by the very high number

This is a penetrating and thought-provoking post. I wonder how many years it will take for population growth to absorb 230,000 empty housing units, and what condition the houses will be in when the demand for them reemerges.

And how much sales taxes will be lost by the spending by the people who have left not reverberating around in the local economy.

I can see my house! Not really. I miss working in a high-rise building with such fantastic views. There are at least two of those empty houses right in my neighborhood. The "new neighbors" I featured in one of my Halloween posts moved into a foreclosed house that was empty for a while.

WEll Alabama just joined your state with our ridiculous new law. Our farmers are watching produce rot in the fields. I'm sure our housing situation will follow. Sad.
V

Such a sad commentary on the new laws in regard to immigration.

Immigrants and foreclosures. I wonder why there are not more houses to rent though??
You have a great view from where you stand.

I can see where Sharon's house is but not the house itself, of course. What an awesome view you have. I would never get any work done if I had that to look at.

Very interesting post and the title is a good one too.