Photo: Our Lady of Guadalupe 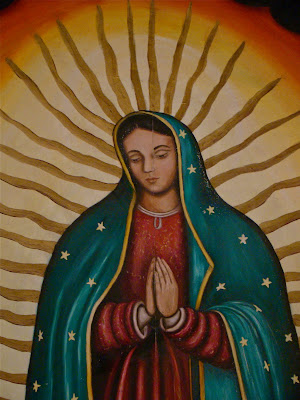 Here is a photo of "Our Lady of Guadalupe," which is in the Old Adobe Mission in Old Town Scottsdale.
Growing up in the Southwest, most of us learn the story of Juan Diego and the Miracle of the Roses.
Locals re-enacted the play of the Miracle of the Roses and had fiestas until 1966.
Juan Diego comes back from the desert and tells a priest of the appearance of the Virgin, but the priests do not believe him.
Juan Diego leaves the church and goes back to the desert and tells the Virgin that no one believes him and requests a sign that will make people believe. She instructs him as to what to do and promises a miracle.
Juan Diego goes back to priests and unrolls his blanket and the image of the Virgin is created by roses in the blanket, which is called the Miracle of the Roses.
Today is Sunday, so check our travel photos of Budapest at Viva la Voyage!
Posted by Julie ScottsdaleDailyPhoto.com at 2:56 AM

Lovely image. I've never been inside this mission. I'll have to make a point of it.

Life Is A Road Trip said...

So beautiful. I always love the paintings found in churches.

I love this church. Here in New Mexico we have bumper stickers that say "In Guad We Trust." Nice shot Julie.

Beautiful image and I liked the story of the miracle of the roses. Not to be flippant, but it almost sounds like some of the miracles people see today in food and window streaks.

For a minute there I thought I was back in Santa Fe! A revered icon.