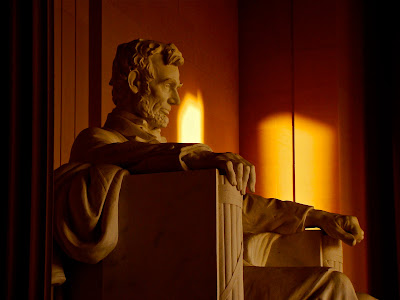 As I mentioned yesterday, the light peeking into the Lincoln Memorial at sunrise during November does not hit the statue of Lincoln, but it still creates angles that add to the quiet morning atmosphere.
I was trying to think if Lincoln had any connection to Arizona. (Scottsdale did not exist during Lincoln's lifetime). Arizona was a part of the New Mexico territory governed by the federal government during Lincoln's presidency. Arizona became part of the U.S. following the Mexican War about 15 years before Lincoln became President.
There is a connection that comes to mind. Arizona is the location of the westernmost conflict of the Civil War. The "Battle of Picacho Peak" occurred between Phoenix and Tucson when a small band of confederates from Tucson encountered a few Union soldiers. A few shots were fired and a couple of people injured, but fortunately there were no fatalities. People actually to reenactments of this "battle" that involved about 20 people. People back East would certainly not call this a battle. (Picacho Peak, by the way, is a redundant name, since it means "peak peak.")
This week we are showing nighttime photos of Budapest on Viva la Voyage.
Posted by Julie ScottsdaleDailyPhoto.com at 2:55 AM

Last Thursday's Lincoln Memorial and today's photo of Abe are both just awesome! Washington D.C. is a great place to visit!

This series has been breathtaking. What a golden photo shoot that was!

This is a nice series on the Lincoln Memorial.

What an atmosphere for such a respected man.

The whole series from Lincoln Memorial are great with 'yellow' light.