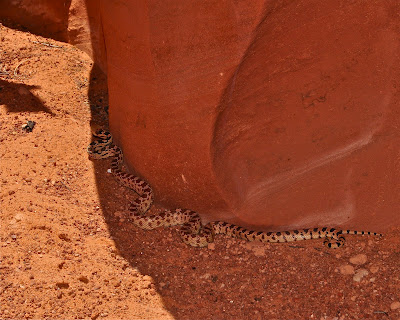 Just after we were walking into Secret Canyon, we saw this young bull snake.
The bull snake had apparently fallen from the top of the canyon.
Bull snakes often exceed six feet in length and are harmless. We have many bull snakes in Arizona.
They are good to have around if you live in a ranch or in the desert because they go after rodents.
They are often confused by people for rattlesnakes and are unnecessarily killed. Part of the reason that bull snakes are confused as rattlers is that when they are threatened they go into a defensive posture of impersonating a rattlesnake. They will hiss, flare their face into a more triangular flattened shape, and they will take their tail and vibrate it against the bushes, trees or rocks to make a sound.
Rattlesnakes will elevate their tails to make a rattle sound; whereas, the bull snake will keep their tail down to make contact with bushes, trees or rocks to make the sound.
Bull snakes also seem to have an immunity to rattlesnake venom so they are being studied further for their antibodies.
Tomorrow we continue the photography tour into the slot canyons for some fabulous photos.
Posted by Julie ScottsdaleDailyPhoto.com at 2:56 AM

Despite the fact that Bull snakes are harmless, still most of the people are afraid of them!

This one is a beauty! So long and such a beautiful pattern. Very nice.

The snake really blends in, so nice catch.

Yikes! That is a long snake. Interesting that they are being studied. Back in the 1950's, both of my parents were stricken with polio. My mother passed away, but my father recovered and one of the treatments they used on him involved some kind of snake venom.

They look terrific in pictures!

Bull snakes are great to have around. Many of the canyon visitors who never leave the rim think the Bull is a Rattler.

Stop teasing, and bring on the slot, please.

Holy cow! That makes the snakes we see around here look like worms. Interesting facts about them too. Love the canyon photos Julie.

that was an interesting and informative post. thank you

That huge thing is harmless?! :-O I wouldn't want to get anywhere close to it....

talk about your darwinian adaptions