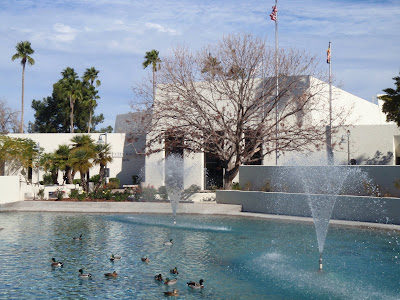 Today's photo is of Scottsdale's City Hall.  It was designed by architect Bennie Gonzales in 1968, and it has an interior kiva for meetings.
Some of you may be thinking water and ducks do not belong in the desert.  It is true, and we do have water because of our ingenious ancestors, the Hohokam, who inhabited the Scottsdale area from about 300 BC to 1400 AD.   The Hohokam were farmers and built a vast and complex array of over 125 miles of irrigation canals.  These canals are still in use today by Salt River Project.  The canals provide water to farms, homes, golf courses, businesses, and carry the Central Arizona Project (CAP) water from the Colorado River, 200 miles away.
Scottsdale is home to about 250,000 people, the sixth largest city in Arizona and is about 185 square miles in size.  Arizona became a state in 1912, and Scottsdale became a City in 1951. Scottsdale was named the "Most Livable City" in the United States in 1993 by the United States Conference of Mayors.  Temperatures typically range from 40 degrees to 70 degrees in winter and 75 degrees to 104 degrees in summer, and yes, it truly is a dry heat.  We receive very little humidity.
Scottsdale is a premier golf and resort destination and I will share many hotels, golf course and dining experiences with you in the days to come.  One quote that describes Scottsdale was by the New York Times when it proclaimed Scottsdale as "a desert version of Miami's South Beach."
Posted by Julie ScottsdaleDailyPhoto.com at 2:56 AM

A desert version of South Beach? Now that is one I hadn't heard before.

Desert version of Miami's South Beach - whats up with that! Those condo owners next to the canal will enjoy the smell when the water is drained each year by SRP!

I must be going to the wrong places, I haven't run into all the girls in bikinis in Scottsdale.

I remember an article in the Phoenix newspaper about the N.Y. Times calling Scottsdale like South Beach. The reporter probably visited Scottsdale on a Friday or Saturday night and went "clubbing" with a bunch of Scottsdale fashionistas.

Pete: Thanks for your comments. I see you operate a local news service. That is great. And yes, the South Beach comment was different. I always think it is hard to compare the desert with a beach. Let's hope there is no smell when the water is drained or maybe it is done in the middle of summer so the heat kills off any bacteria or smell and many of the residents may be traveling out of the heat or at least staying indoors in air conditioning.

Stu: the pools are where the action is