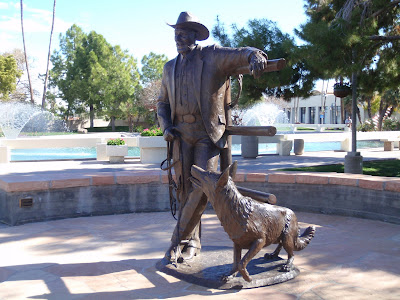 Every city has legendary civic leaders. Scottsdale's is Herb Drinkwater, a long-time Mayor and businessman. He was known for his practical jokes and for being an exuberant city booster.  He passed away from cancer in 1997 after serving as a member or Mayor of the Scottsdale City Council for 26 years.  When he retired he had a 96% approval rating.  Mayor Drinkwater has been immortalized in this bronze statute that is displayed at the Scottsdale Mall.
An example of his enthusiasm for Scottsdale is that when Arie Luyendyk, a native of Holland, won the Indianapolis 500 in 1990, someone told Mayor Drinkwater that Luyendyk lived in Scottsdale, and Drinkwater replied that he will send him a letter of congratulations for living in Scottsdale.
Posted by Julie ScottsdaleDailyPhoto.com at 2:56 AM

Congratulations Julie! Your new site looks great. I can't wait to see all the photos you will publish from Scottsdale, a very beautiful city indeed.

I hope to be immortalized in bronze some day as well.

Another great Arizona city! I look forward to your photo's.

Great. I'm looking forward to your photos and info on one of my favorite cities.

Thanks to each of you for your comments and encouragement. This is a new endeavor that I will hope will be enjoyable and informative.

Sharon and Jarart, I have enjoyed your Phoenix and Prescott sites, respectively, and hope that my Scottdale site is complementary to show the beauty and diversity of Arizona.

Happy to see another Southwest blog. Thanks for your info on the statue and the man. His approval rating is remarkable. Must have been a colourful character!

Kate: Thanks for checking out the website and it is good to hear that you like some history and learning about others. We noticed that you have started to add some personal interest stories on your website, which really has brought the photo and community you live in to life.

Jarat: We have been enjoying your Prescott daily Photo site. Keep it up.